Some info and articles about Demodex

What are Demodex mites?

Demodex Mites, also known as face mites, are not so well known by the public, they are parasites which live on the face and in the hair follicles of humans.
Demodex folliculorum was first described by Berger in 1841 and demodex Brevis was found in the human skin in 1963.
They can badly damage the facial skin of humans, the problems start many times during puberty because of the hormone changes which triggers the sebaceous glands to produce more sebum which is perfect for the mites.
A second wave starts usually in the middle age when the immune system is changing and the demodex mites population has increased,
It happens many times that middle aged people who never had a problem before suddenly get acne and/or rosacea.
There are two existing types, the longer kind, Demodex folliculorum, which live in the hair follicles and the short ones, Demodex brevis, which live in the sebaceous glands.
This mites are invisible to the naked eye, usually measuring between 100 – 300 microns in length, there are five stages in the life cycle. In this “FAQ" section we explain how you can find them under the microscope. 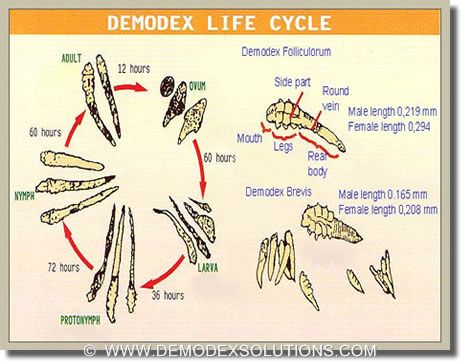 Where do Demodex live?

Demodex mites can live on all body parts wherever there are hair roots and sebaceous glands however they are most prevalent in the facial area, especially the nose, forehead,chin, and cheeks,the back and chest are also vunerable.

These areas have the most favourable living and breedingconditions and provide an optimum temperature for them to thrive. The Demodex folliculorum mite can also live in the eye lash roots and can be the reason for blepharitis (ocular rosacea), itching and infections.
The hair folliclesfrom the scalp are also often infected with itching and hairloss as a result. The mouth of these mites is like a very sharp needle that can directly sting into the cells to absorb nutrition.
They like a humid and warm environment and become the most active in the dark, after mating on the surface of the skin, they crawl back into the skin and lay eggs, taking bacteria with them which live on the surface of the skin which is one reason from infections,
when they die they decompose in the skin and exposing their host specifick bacteria iwhich is probably the biggest reason for infections and allergic reactions. 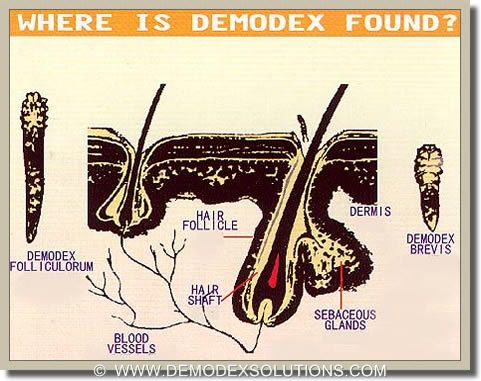 This is how Demodex mites look like.
Demdex Brevis mite 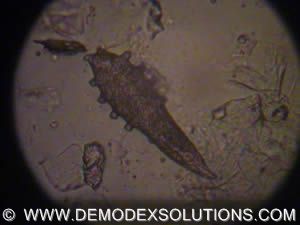 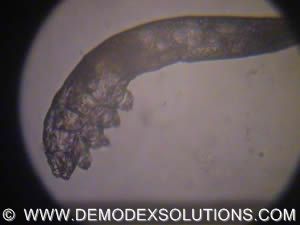 The skin problems caused by demodex mites were ignored by the Western medicine for already a long time!
Down here some older articles which shows this is in Asia already knowed for a long time.

An article from a Taiwan newspaper entitled “Recognitionof the Acnes”

Recently some newspapers in Taiwan carriedan article by Lin Xinmei entitled “Recognition of the acnes”. “Fight the acne from itspredisposing causes” .
He called on the people to fight thecauses of acne and eliminate them through the treatment and preventionof the predisposing causes.
He summed them up as originating from seven sources:
Ø Excessive endocrine hormones
Ø Too much oily food
Ø Dirty skin
Ø Physical injury
Ø Environmental humidity
Ø Cosmetic irritation
Ø Medical by-effect.
In fact, besides the above-mentionedpredisposing causes, medical textbooks and journals both at home and abroadstate further causes which may be related to genetics or due to bacterialinfection.
Doctorshave been conducting their treatment and giving instructions on the basis of so many theories.
However, there is no final conclusion thus far. Doctors have prescribed medicines whose results are not so satisfactory. Preventionis almost beneath mentioning.
The patient’s normal complexion has frequently been affected by acne attacks. Even worse, acne infections sometimes leave scars on the face, which causes much vexation.
Acne has attracted much attention inthe general population. Whether or not it can be eliminated dependsupon a new and correct interpretation of its predisposing causes.
Following the research of the medical specialists in this field for many years, and based on my clinical diagnosisfor over 30 years,
I am of the opinion that acne is a skin diseasecaused by demodex mites and that after the application of my patentednew medicine “Zhongzhou ointment”, the acnes soon vanishes.
According to an investigation of the infection of demodex mites in the human body made by scholars both athome and abroad, the total infection rate makes up 60%, and from those 60%,
some 10% are heavily infested with demodex mites, the same amountas those are suffering from acne. Some aged people also suffer from acneand rosacea,
which some would mistake as being hereditary but they are not. They are in fact, contagious diseases.
Medical science has proven that newly born babies are free of these diseases and they become infested by physicalcontact with adults suffering from these diseases by kissing, face toface hugging, towels etc.
As they grow, the babies will have more and more contact with infested people. This means a greater chance ofthe reproduction rate of the demodex.
However, as previouslystated, only 10% out of the 60% of those with infection from the miteswill grow into a disease.
People with stronger immune systems don’t have a negative reaction to the mites etc. According to the research, once thehuman body is infected, the demodex will become parasitic,
mainly in thesebum of the hair follicles of the face where body touch is frequent, the sebaceous glands are well developed and the temperature is perfect.
They absorb nourishment, excrete wastes, copulate and laying eggs. Within15 days, they give birth to a new generation, the mites die, rot and liquefying in the skin.
As the demodex complete the entirety of their life cycle in the sebum glands and hair follicles, they cause mechanical and chemical stimulation to the skin.
More and more stimulation will produce an allergic reaction that leads to inflammation such as,popular eruption, pustules etc. which we all know as acne and even erythema.
If this situation is not followed by correct diagnosis and treatment, the mites will increasingly multiply and the inflammation will get worse, leaving scars on the face,
the damaged pores accompanied with widening of the capillaries, thicker skin, hyperplasia and worse, there might be vegetation or pimples which will spoil the skin.
Starting from this new medical theory and practice, we would come to a new comprehension and explanation of the predisposing causes of acne, and open up a new path for combating it.
In order to get rid of acne, we must popularize advanced medical knowledge, cast away all the specious theories,and prevent the infection and spreading of the demodex mites.
To achieve this, the adults must take care of the younger generation.
They will have to take measures for the prevention and effective cure of the demodex mite infection themselves.
Where there are facilities, training classes should be opened and general investigation and treatment of the disease be conducted, by doing so, the acne and rosacea can definitelybe eliminated in a sweeping battle.

This paper was published in the journal "Bulletinof the Academy of Sciences of the Republic of Kazakhstan", 1992,No 4, pp.84-88.

Your Cart Is Empty

Selling in your shop?

Visit and use our

A source of users experiences.